And now for something...

In fact, I think that the anniversary/vacation my wife and I just took could well be the catalyst for a wealth of new music. Not only did we have a wonderful trip together, we kept experiencing one amazingly spectacular thing after another! First stop was a 2-night camping trip near Solvang, CA, at a place called Lake Cachuma campground. 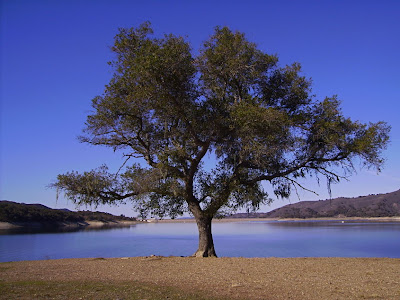 While there, I ran across this eerily-familiar oak tree overlooking the lake. Are you suffering from Deja vu too? I could swear I've seen it as the logo for a movie company :-) Perhaps their artist slept under this same tree? We saw California quail, hawks and turkey vultures, which I dutifully videotaped. Although quite chilly at night, the projected rain forecast patiently and politely waited until we packed up and left the campground before letting loose.

We then headed up the coast toward Big Sur via the breathtaking highway-1, stopping along the way to see the jagged picturesque coastline, 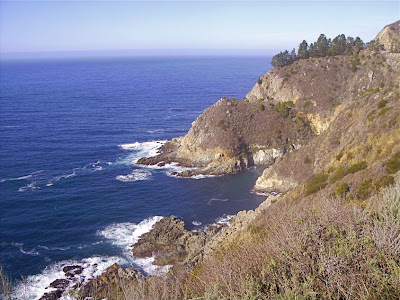 and a beach full of elephant seals (which I got more video footage of, including some bellowing males and some far-too-cute pups.) 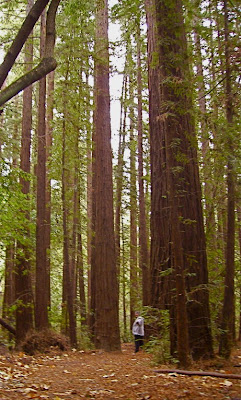 At Big Sur, we stayed at Glen Oaks, which I heartily recommend, by the way. Took a day hike around the Pfeiffer Big Sur state park, which has its own little stands of Redwoods. Oh, and a bit more video was taken, and a picture or two. 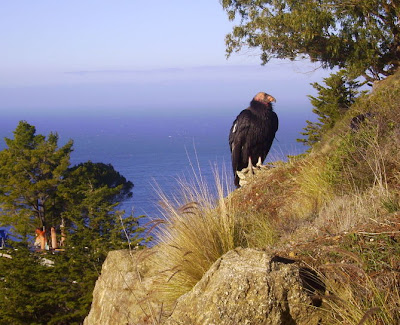 But on the way back home, about 10 miles south of Big Sur, the greatest adventure was circling overhead, or in most cases, just perched on the guard rail, waiting for us to stop by and say hi. 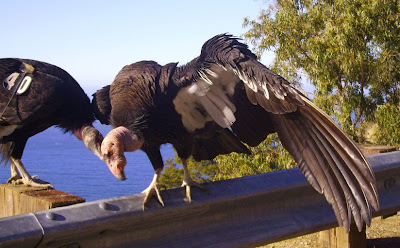 There were at least 20 California Condors, all tagged and re-released up here (probably many from our CRES center at the San Diego Wild Animal Park.) Some were sitting in the trees, some on the guard rail just 20 feet from us, and some spreading their wings (with 10-foot-span) and circling overhead. 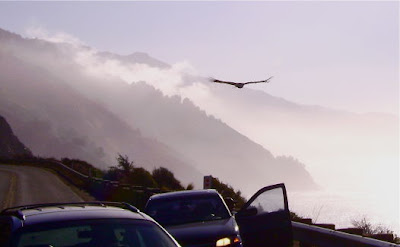 A few of these grand birds were flying just 15 feet above the roadway, giving some drivers a bit of SGBS (sudden giant bird shock) as they flew toward each other. These huge gentle birds seemed a bit too comfortable hanging out with the people, and I am hoping that they don't get injured or sick from too much human contact. Debbie V., a very helpful worker at the Ventana Wildlife Society, showed up to do some bird counting, helpfully answered questions from onlookers, and eventually had to shoo the birds off to a safer distance with a little water spray from a big squirt gun. These birds caused me to use up the rest of my video film and batteries, and we headed home to become members of Ventana, and start editing some really stunning video. 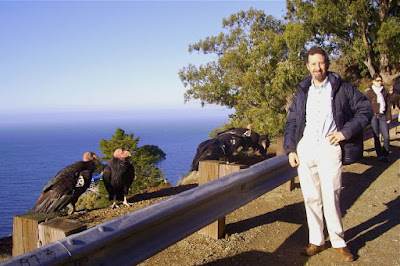 The cuddling/grooming behavior I watched/recorded, along with the extremely graceful gliding, suggests a slow romantic waltz to accompany the video sequences... I feel more music bubbling up! Time to add this to my growing pile of New Years projects. Which reminds me... here's wishing you and your family/friends a Happy New Year, I think it will be a good year indeed.
Penned by Drakonis at 5:58 PM

The close encounter with condors leaves me breathless. They are such magnificent birds and to see them wild and up close - I would just be overwhelmed with awe. Almost as overwhelming is to see them in photo with a friend.

Absolutely breathtaking photography, Eduard, and the pictures will add a lot to the gorgeous music that will come out of this trip. This is meant for a slide show for all of us who can't get over to Highway 1. :-)