I always wished I could draw beautiful artwork with brushes and colors, but I wound up being a software engineer instead. That doesn't stop the urges though... between the lines of code, the artist in me continues to kick paint buckets and spill creative ideas all over my mind.

So occasionally the artist in me succumbs to the muse and I try to draw things. But sometimes the software engineer in me sighs and takes over, and thinks there might be a way to write a computer program to automatically create better artwork instead. As you can imagine, the right-brained artist and the left-brained engineer tend to scoff at each other over folded arms, and I usually wind up getting nothing done.

But the other day, the two of them got together while I wasn't paying attention, and they started working together on a secret project called "esnw". They pooled their ideas from all four corners of the globe. The artist described large groupings of abstract patterns and colors that might be interesting if combined. The software engineer captured and organized the patterns and colors, and devised a way to choose a different set of patterns and colors, based on a "roll of the dice."

The software engineer, when he finished the prototype, announced, "Pick a number, any number, and the software will use that number to generate a (usually) interesting abstract set of patterns!" The artist, still feeling rather skeptical, suggested the number 360. The engineer typed 360, and the computer immediately displayed this: 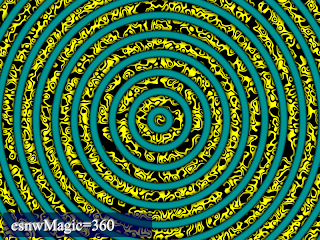 The artist was tickled by the circular irony, bold colors and juxtaposition of regular and irregular shapes. The smirk of the software engineer goaded the artist on... Artist: "how about 825?" 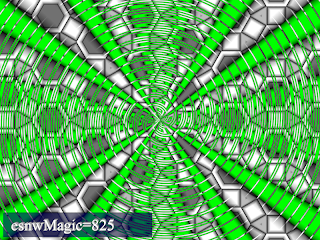 The artist was intrigued. "OK hot-shot, I like that combination of patterns, but I don't really like chartreuse in the foreground... I really like those geometric shapes better."

The software engineer didn't miss a beat, "Ah, so you want to know what that picture would look like on the other side of the looking glass? I'll just type in 'negative 825' then, shall I, and see what it looks like from the back?" 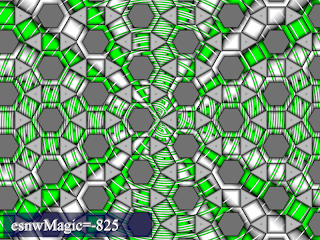 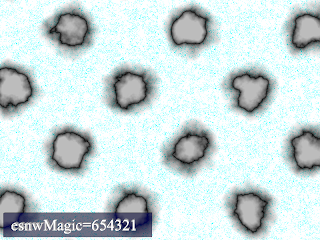 The artist was smug. "Well, that looks rather boring for such a large number."

The software engineer shrugged. "Beauty is in the eye of the beholder... I think that looks rather interesting, myself. I think I'll make that my desktop image."

After a week of work, the beginnings of a rather fun art-generator has begun. Currently it only goes up to a million (and down to negative-one-million on the back side,) but that is a lot of different images. And that is just one "world". I have at least 12 additional 3-dimensional worlds coming soon, each with a million possibilities... for example: 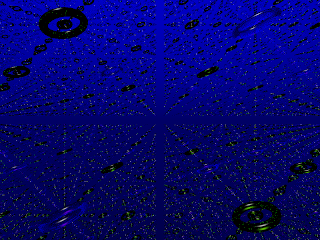 If you find this interesting and want to e-mail me a number, I will e-mail you back your very own piece of "esnw-abstract art" directly based on it. And stay tuned, other worlds are on their way!

Oh, the software engineer wants a last word: This is all written in the "POV-Ray" raytracing scene language, and one feature I am building in is the ability to not only write the image, but also to write the related POV-Ray scene text file (a language that can write itself) too, so that you could fine-tune colors and textures once you find a scene you like.
Penned by Drakonis at 5:46 PM