2=1: The end of the Experiment

Background (Music)
I was raised on all sorts of classical music... it often flowed through our home. It was mood music.

I was also raised on electronics, and built my own noise-making circuitry... Walter/Wendy Carlos' "Switched-on Bach" synthesizer music often flowed through my room. It was MOOG music.

So, I guess it is no surprise that my personal musical tastes have always bounced between the rich sonorities of symphonic woodwinds/strings/brass... and the unearthly-but-intriguing tones of synthesized instruments. I've always been interested in the baroque/classical musical forms, as well as experimental algorithmic/computer-generated compositions... two very different ways of creating music.

When I began seriously focusing on composing and publicly posting my music (as "serious" as a hobby can be), I initially confined myself to real-world instrument sounds and conventional compositions. But soon the experimental side of me wanted to explore and share. I had begun finding really interesting web sites, information, and software programs that let me play with computer-generated music and wild-sounding synthesizers, in ways I wished were possible decades before. I had stumbled into a candy shop, and there were many other people interested in these things too. So I thought I would try sharing some of my own experimental creations as well.

But these were strange and untamed pieces. They didn't play well with others. I was worried that, like oil and vinegar, my more polished conventional pieces and my wild experimental pieces would clash, and people interested in one style would not be interested in the other. Or worse, after hearing just one of my pieces, they would assume all my music was that style, and ignore the rest. What to do?

I decided to create a separate online music account, and put all my experimental stuff in there. I also chose initially not to connect the two accounts to each other... this new account would stand on its own for awhile, so I could see what people thought of the experimental music by itself.

What is in a name?
My Schwansongs "label" already had the account name "Drakonis" on my main music website, Macjams.com, as well as other places like MySpace.com and Alonetone.com. It was time to come up with a different name for this new experimental account. Hmmm... 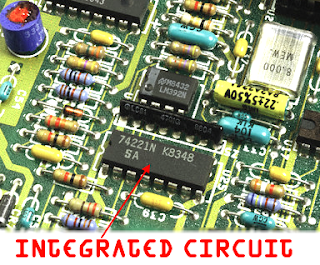 Well, on circuit boards, the main building blocks that make up the electronics are called "integrated circuits", or I.C.s for short. On the circuit board, the spots for these IC's are usually numbered, so that they can be easily identified and assembled... and they are given names like IC1, IC2, IC3, etc. Given my love of electronics and wordplay, I decided to call the new account "IC42", referring to both a position on a circuit card, and a nod to "Hitchhiker's Guide to the Galaxy", and a hint that I am overseeing two accounts.

Hakucho's Swan-song
I never intended this to remain a secret account, so it is now time to unmask the identity of the "IC42 Experiment". I have added links to cross-connect all my accounts, so people can find my two styles more easily, if they are interested. Don't worry, I will always be writing music in both styles, the experimental ic42 world will live on and produce new music and art and videos. I just will not keep the ic42 identity a secret any more. I also wish to thank the small circle of friends who discovered the IC42 identity early on, and kept it secret with me. I appreciate your help and patience during the experiment.

With that said, I will be retiring "Hakucho", the mysteriously laconic guy behind ic42. "Hakucho" was my old nickname when I was in Japanese language class decades ago. The bird we call "Swan" in English is called "Hakucho" in Japanese. In German, it is called "Schwan"... so the nickname always fit me nicely.

Coda
To wrap things up, I should mention where you can find my conventional and unconventional pieces of music. The complete set of "SchwanSongs" music, artwork and videos can be found at these web spots:

So now you know that IC42 is me too, and that I am not going to change anything or go anywhere. I do hope that you will continue to listen to (and hopefully enjoy) all my music (and from here you may now have discovered some new music to listen to.) And if any readers are interested in more information on some of my music creation tools and techniques, drop me a note and I will offer some tips and tidbits here.

ttfn,
Eduard aka Drakonis aka hakucho aka ic42

Postscript
Here are a couple of ic42 examples... click here to read the story and listen to the music for a new take on Halloween.

Below is an algorithmically-generated piece of music, dancing with some hypnotic fractal patterns (seeing it directly from the Photobucket account is a little better than this embedded version.)